An art student chances upon a former fling at Punggol MRT station. A reporter lies awake at four in the morning, chronically unable to sleep. Two men lie in bed, watching YouTube videos of hail falling in Singapore, while a sugar baby trawls through Google Maps. In this novella by Daryl Qilin Yam, a dozen lonely individuals in Singapore witness a freakish instance of snowfall, lasting for exactly four minutes and twenty-six seconds. Shantih Shantih Shantih is a heady mix of desire and dauntlessness that revels in its interconnections, pulling together a community that is at once together and apart.

If I am going to be an artist like Arman, then there are some things I must do. When I see him again, tonight, I will tell him that I too shall portray the world in its beauty and its ugliness. I will tell him that, for reasons unknown to me, I have declared myself the maker of the photograph that hangs in the living room of my employer’s flat; that he will find this claim of mine to be impossible and even delusional, but I will not; that I will in fact do my best to persuade him otherwise, that I am indeed the taker of that photograph; and that as I take my time to describe to Arman the elements of this photograph, the exact composition of that image, I will also inform him about my process, of how I stood there on that mysterious path. I will tell him that when I took the photograph of those two figures, dressed in those same blue coats, I too was dressed in a blue coat of my own. And I will tell him that it was freezing when it started to snow, that it was colder than anything I had ever felt. Can anybody even imagine the amount of strength it takes to suffer for your own art? But did you know, Arman, that I would have remained standing there on that path, taking photographs of people on that path, no matter how much it might have snowed on that day? That on that day, in fact, there was never enough snow, lying about in piles? That snow will never be enough until it is more than enough? That love will also never be enough until it is more than enough? And that love, this love I claim to know, will never last the way snow or I will ever last? That this is the very thing all of us have never learnt to live with? 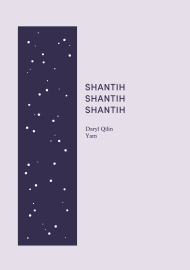 Daryl Qilin Yam is a queer writer, editor and arts organiser from Singapore. He is the author of the novella, Shantih Shantih Shantih, and the novel, Lovelier, Lonelier, a finalist of the 2021 Epigram Books Fiction Prize. He co-founded the literary charity Sing Lit Station. His short fiction and poetry have appeared in the Berlin Quarterly, Transnational Literature, and The Straits Times. His first novel, Kappa Quartet, was selected by The Business Times as one of the best novels of 2016.