Winner of Poetry in English

One to the Dark Tower Comes

Each of us embarks on a life’s journey to reach his or her own dark tower, but what lies behind the door? This collection, whose title alludes to Robert Browning’s 1855 poem Childe Roland To The Dark Tower Came, is a personal and collective quest to uncover answers to life, death, grief, happiness, and the violence wrought on one another. Towers rise and fall, and real and fantastical monsters are encountered, as the writer/reader/pilgrim navigates the bumps and turns of an inquiry which challenges one’s conviction in the Great Unknown.

But for the present, it’s beyond my control. When it finally happens after yet another 20 minutes, the helplessness underscores the inexorable reel of martyrdom, twirling madly in and out of love, as if the whole universe will now be birthed into another plastic bag, clean as disinfectant. We – all of us sworn witnesses, heart on sleeve – remember everything in a pinhole’s entirety, only that nobody can recall a nation’s shame quite the same way. Deceptive blue sky, those green, green fields, then grey unforgiving rain, these clichés set up the perfect grime. Then what? After all the ready pool of iconography dries up once we need a dip. But the interrogator soldiers on. Ferns and creepers cling to the shlubby ordinariness of it all. Soft barnacles have encrusted the sides. Tinder sticks crack like shards. So vivid are the flashes, no one notices the Velcro hornbill denting the Plexiglas chamber while the kids stand struck, caught in electron crossfire. The abandoned army bunker rebuilt brick by brick from scratch. The bouzouki starts first, the pungent skunk next as a skein of commensals follow suit like pilgrims. In the middle of the red river, the hangman, hunched and ape-like, hops in with lasso, drill and unimaginable tools in his pouch and asks for directions after the deed. The lorikeet’s shriek takes our collective silence. Later at midnight, curled up in his office couch, the bone collector, hard of hearing, is attacked a third time by visions of bugs and bunnies. Intolerable heat eventually melts the ancient steel glacier off the thin joint masonry, the disarray of the portal – tomato ketchup sprayed all over the cubicle, a horse’s head placed beside your sleepyhead, a firing pin stuck – all swept away into the sea in a flush, leaving a white shirt in its pristine condition. “If this is all you are asking, then say so,” says the arsonist as he strikes a match to the composition. Years earlier, a boy discovers it one day, bits and bytes soldered to a heap of flesh, bolts and assorted debris accumulated over crime. The foundry’s door opens and shuts, some jaw snaps. That’s it.

A remora
waits at the wings
polyps inch, by inch 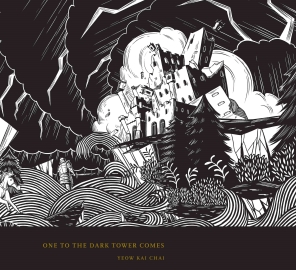 The title of the fascinating, ground-breaking One to the Dark Tower Comes echoes the title of an 1852 poem by Robert Browning, ‘Childe Roland to the Dark Tower Came’. Both poems echo Shakespeare’s 1606 King Lear, where the character Edgar, feigning madness, sings, “Child Roland to the dark tower came; / His word was still ‘Fie, foh, and fum, / I smell the blood of a British man.’” Then there’s the eleventh century French epic poem Song of Roland (where a reluctant Roland blows his horn so loudly, he bursts a blood vessel and dies!). And Roland Deschain from Gilead from Stephen King’s The Dark Tower series! What ties all of these together is a hero who’s trying to prove himself but who is also an unreliable narrator. Yeow Kai Chai is sampling literature – the same way T.S. Eliot did one hundred years ago in his modernist classic The Waste Land. Woven into the allusions is the sense of a personal lament (as Eliot would insist his poem was), a lance-like social critique, wonderful sonic qualities, sincerity half-hidden behind nimble wordplay, and the global political reach of going toe-to-toe with the entire Western cannon, while more than holding one’s own.

Yeow Kai Chai is a poet, fiction writer, and editor. He has three poetry collections, One to the Dark Tower Comes, Pretend I’m Not Here, and Secret Manta. He has worked in the media, including as an entertainment editor and music reviewer, in various publications such as The Straits Times, 8 Days and My Paper. He co-wrote The Adopted: Stories from Angkor and Lost Bodies: Poems Between Portugal and Home, with three other authors. A co-editor of Quarterly Literary Review Singapore, he was the festival director of the Singapore Writers Festival from 2015 to 2018.