A riveting look at the fiercely original, intellectually brilliant mind of Singapore’s unofficial poet-laureate, Edwin Thumboo. He is brusquely vocal about poetry with a purpose and yet appears a hopeless romantic in his poems about his wife. What happens when a mind which is such a melting pot of brilliant ideas and contrary emotions tries to unscramble the identity of a country like Singapore which is known for a fierce economic growth that has often elbowed aside everything else? The Votive Pen sees Edwin Thumboo’s poetry without the static of earlier critical writing and with an intense alertness.

Singapore on my Mind

There is a map inside ET’s mind. In fact, not one but many maps—a veritable cartographer’s paradise. There are little pigeon-holes with scrolls stowed away, catalogued as old and new, political and topographical, cultural and religious. When he chooses, he picks out one and though he continues to look at the person in front of him, he unrolls the map in his head, follows with a fingertip the contour lines, sharpens his vision of a tract with a cartographer’s chisel, bends over it in closer and closer scrutiny till it captivates him completely. It is this that gives the spectator the sense of the ‘other’ when with ET. The maps can be of many types. For instance, if he complements a lady as ‘elegant’, his mind might move immediately to map elegance, starting with the near-at-hand cheongsam and going up to Cleopatra’s headdress. Or if he dwells for a moment on a Chinese logograph, his mind might map symbols of Freemasonry, the Jewish faith and those which appear on the control panel of a cockpit. It is the old childhood habit of noticing patterns—the series of hand movements when his father would comb his hair or wash his hands, only made infinitely more complex by his readings of history and literature and mythology and anthropology and philosophy. A complexity that is added to by the various personas that exist within him—the poet, the scholar, the traveller, the citizen, the civil servant, the rebel, the nationalist and perhaps even the observer of politics. To this if one adds his Chinese and Indian inheritance and family practices of old and mutated forms of Taoism, Hinduism and Christianity, the vision of a neatly catalogued and pigeonholed library appears too tame, perhaps even a flight of fancy. And all this even before one has taken into account the power of imagination!

Consequently, when ET speaks of Singapore the maps, more topological than topographical, that unfold are many, spread out with impatient rapidity. There is of course the colonial map of the city…But there are also other kinds of maps that unfurl—the cultural map with white and brown-sahib culture in the Cricket Club, the Tamil/Indian culture of Serangoon Street with buffaloes and open fields where Tekka Market stands today, the Cantonese operas at the Nam Tin Hotel of Chinatown, or the Peranakan and Eurasians of Katong. There can as easily be a food map—the first Polar Café on High Street with its curry puffs (‘no change there, can assure you’), the cakes at Adelphi in North Bridge Road, the kway teow at the Hock Lam Street food stalls or the shaved-ice stall in a hole opposite Aurora, the only Chinese Western-style departmental store of Singapore at that time.

…It is a city that has entered his bones—just as those shop windows are real, so is the reflection of himself in the plate glass—a young man with a bristling mind. 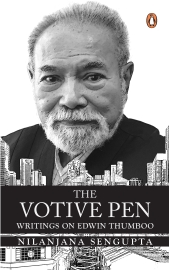 Nilanjana Sengupta is a Singaporean author who has built her reputation on writing books which travel to unchartered territories. In A Gentleman's Word, she chronicled the legacy of a forgotten war hero, Subhas Chandra Bose across Southeast Asia. In The Female Voice of Myanmar, she wrote of the latent masculine bias of Burmese culture and women's voices which have managed to cut through the clutter. A Biography of M Bala Subramanion was a nuanced look at the Tamils of Singapore who struggle with vulnerabilities of their own.