New Orleans is a travelogue written during Singapore's COVID-19 circuit breaker about a trip to the American city in October 2019. A Singaporean writer and an Argentinian playwright-director wander the streets of the French Quarter, staying sober in a party town, singing on Bourbon Street, refraining from gambling in casinos and dodging alligators in the bayou. It all ends with a gate-crash of Tennessee Williams’ house. Along the way, some observations are made of art, friendship and being alive.

Upon check-in at the French Market Inn, some writers pile into the hanky-sized pool in the muggy mid-afternoon heat, bobbing up and down with bottles of wine.

Santiago and I flee. We’d made a pact
to explore the city together. To write a book
each about our adventures (“a little one,”
according to him, “with lots of pictures”),
although perhaps I’m the only one who will
hold up my end of the bargain.
Decatur Street, in the French Quarter,
runs parallel to the Mississippi River.
Exiting the hotel’s front door, you can either
turn right, towards Canal Street and its
theatres and casinos. Or you can go left,
towards Frenchman Street and its jazz bars.
The 27-degree-Celsius weather is a warm
caress after the frigid sub-zero temperatures
of Iowa City. White fedora and bare legs
weather.

We go left, hook left again, towards
the most touristy of the French Quarter’s
touristy streets: Bourbon. Named after
France’s ruling family, the House of
Bourbon, at the time of the city’s founding
in 1718, it is Rue Bourbon in French. The
old names persist: mosaic tiles on a brick
wall along the street explain that it was
Calle de Borbon, after the French gave New
Orleans to the Spanish in 1763. With the
1803 Louisiana Purchase, the Americans
gained control of the colony and translated
its street names. And history-ignorant
alcoholics assumed they named a whole
road after whiskey ever since.

We arrive on foot at Bourbon before
sunset. No moon yet. One moment you
are just walking, and the next you have
joined... a crowd on the boulevard. It is a
sudden, euphoric experience. Neon lights
on storefronts and billboards bounce off
everything, casting a green-ish yellow pall

on the entire stretch. Like electric will-
o-wisps from a noxious but irresistible
swamp. An oasis of insanity. The urgent
sound of children drumming on up-turned
plastic pails; the pungent smell of cigars
and jumbled aroma of cannabis in the
air. Shrieks of laughter from beer-toting
revellers on balconies. The steel trellises,
posts and wrought-iron work of galleries
hanging over the streets like vines in a
jubilant jungle. Cheap beads glint in the
gutter. Green, purple, pink, black, silver
and gold. I stoop to salvage them, looping
them easily around my neck. Finders
keepers. Never mind that new ones can be
had for less than $2 from shops, purveyors
of tourist tat, mere steps away. The point is
to rescue the abandoned, the abject. In New
Orleans, souls can be picked up, dusted off,
burnished and renewed. What more beads? 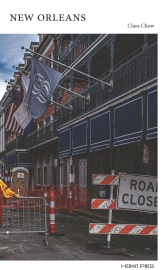 Clara Chow is the author of fiction collections Dream Storeys, Modern Myths (shortlisted for the 2020 Singapore Literature Prize) and Not Great, But At Least Something; the travelogues New Orleans and Caves; and bilingual poetry collection 《几首烂情诗》/Lousy Love Poems. She has been writer-in-residence at Toji Cultural Center in South Korea and an honorary fellow of the University of Iowa's International Writing Program. Having started her career in journalism, she now runs tiny indie Hermit Press.