Home is Where We Are

Wang Gungwu’s account of his university education captures the excitement, the ambition and the choices of a generation that saw it as their responsibility to build the new nations of Southeast Asia. The exploration of the emotional and intellectual journey towards the formation of an identity extends in this volume into an appreciation of love, family life, and the life of the mind. Wise and moving, this is a fascinating reflection on identity and belonging, and on the ability of the individual to find a place amidst the historical currents that have shaped Asia.

Excerpt from Home is where we are

On the eve of my 19th birthday, I acquired two new identities. I was a post-colonial undergraduate; and I was a citizen of the Federation of Malaya. I began to feel less adrift and uncertain about my future. I was no longer a national of China in the eyes of the government and I now had the opportunity to go on learning in a university. In both identities, Malaya loomed large. As it turned out, I was to spend a good part of the next twenty years of my life wondering how I could make Malaya my country.

I was lucky to have such a soft landing. My father had made that possible because he was determined that his only child would not miss out on higher education simply because he had called me back from Nanjing. He could not afford to send me overseas. When he learnt that MU was being planned, he saw that getting me admitted was the only way I could continue my studies. Fortunately, something he did in the years 1945-1947 made that possible. This was when he postponed the family’s return to China after the war ended so that I could finish my secondary education. That way, I would not have to start afresh in a high school in China to qualify to sit for a university entrance examination. He had therefore waited until my Cambridge School Certificate results were announced before we left Malaya.

Little did he know what a good decision that was. When we unexpectedly came back, the delay till the middle of 1947 to go to China helped me in two ways. The certificate I had received made me eligible to apply for admission to the new university in Singapore. The extra two years staying on in Malaya also qualified me to  seek Federal citizenship under the new constitution. Given the Emergency conditions in the country, my status as a Chinese national who was also not local born, or as someone stateless, could jeopardise my chances of being admitted. By that time, my father was open to the idea that Malaya was where we could settle down. My parents never admitted it but I believe they anticipated the political fallout among local Chinese who supported the Republic of China against those excited by the New China in Beijing and did not want me to be drawn to one side or the other. I also began to sense that they now thought that living in Malaya was better than anywhere else in the region. (pp. 5-6) 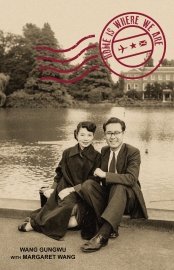